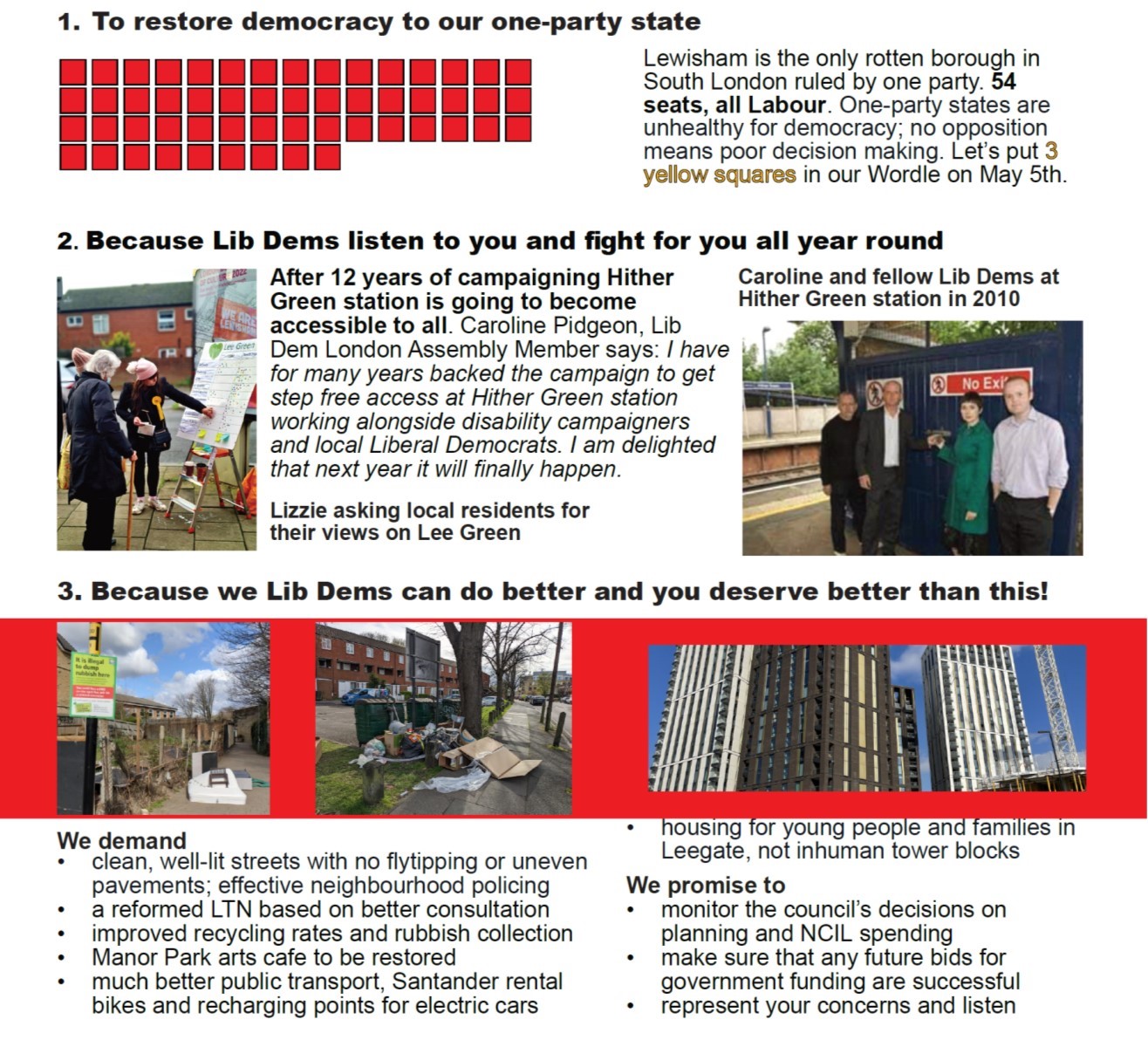 Oto, Manor Park Originally from Mongolia I have lived in Lewisham for 15 years. I have been a Labour voter since arriving in the UK. Since our streets were trashed by the LTN minority privileged scheme
under one party only (Labour) council at the cost of the majority of residents' health we have struggled to get our voices heard to stop the council's toxic anti-green policy.
So I shall be voting Lib Dem on 5 May.

Churchill historian, Celia Lee, of Longhurst Road, Lewisham, is voting Lib Dem for the first time ever. I’m a big admirer of Sir Ed Davey, leader of the Liberal Democratic Party. I’m also an admirer of the late Sir Winston Churchill, who learnt his politics in the Liberal Party. I am voting for the Lib Dem candidates in Lee Green in the May 5 Council Elections because they have all the correct policies for local government.

Jane Alaszewska, Manor Park, is the 3rd generation of a Polish refugee family who settled in Lee. Her family don't have a car and use public transport. I’m really disappointed that the LTN introduced by Lewisham Labour has slowed the buses we rely on and made the LTN permanent against the majority verdict. Lewisham Liberal Lorraine, Manor Lane Democrats’ pledge to hold the council to account on matters such as the LTN, planning issues and the distribution of NCIL funding has persuaded me to vote Lib Dem on 5 May.

Karen, Longhurst Rd, I have lived in Lee Green since 1983 and witnessed the Labour Council asking us to vote for controlled parking and then not allowing us to choose the restrictions. Lib Dem councillors sensibly argued for 10 am to noon, but it was many years before the council granted the residents’ wishes. Same with the LTN: no proper consultation or choice. So now I’m not just a Lib Dem member but a campaigner! Like our three wonderful candidates for Lee Green I could not sit back and do nothing. We all deserve councillors who listen to us and have our best interests at heart.

Lorraine, Manor Lane, always voted Labour, but I can't now, my reason: the LTN. I find the scheme divisive and poorly implemented. It doesn’t work for my family and friends, many of whom are essential workers and they need to get to patients as quickly as possible. Ennersdale Road needs to be properly reinstated, there is no reason for Holme Lacey to be a no through road. It seems as if the LTN has
been "pushed" by newcomers who are less than fair; they have no idea of the contributions that Windrush descendants bring to the borough and their agenda doesn’t cater for people like me. I feel as if I
am being "elbowed" out of the area.

Sam, Burnt Ash Rd, I am voting for the Liberal Democrats because they have a range of good policies designed to benefit Lee Green as a whole, are focused on listening to us and their candidates are local people who are committed to our community. They will provide balance to our current one party Council, representing a range of voices and views at key decision making stages.