Bobby Dean, Liberal Democrat Parliamentary Spokesperson for Lewisham Deptford, has slammed Vicky Foxcroft MP for giving up on the fight against a Hard Brexit.

An amendment to the Queen's Speech, designed to fight a Hard Brexit and back remaining in the Single Market, received cross-party support. However, Vicky Foxcroft MP refused to give it her backing after Labour issued a three-line whip against the motion. Other Labour MPs chose to rebel on a point of principle.

"I am angry. Lewisham Deptford voted heavily to remain and many backed Vicky after she promised to fight a Hard Brexit. The vote yesterday represented her first opportunity to honour that commitment but instead she put her leadership before Lewisham, snubbing the cross-party amendment and meekly backing Corbyn's watered down version.

"I will not accept her attempt to manipulate the public's understanding of what a Hard Brexit is. It is widely accepted - and many of her Labour colleagues agree - that leaving the Single Market will be catastrophic. Any attempt to argue that we can maintain the same benefits while leaving is at best naive and at worst deceitful. It is no more credible than the fantasy negotiating position of the Tories.

"The Liberal Democrats are the only party united in its opposition to a Hard Brexit. We will continue to fight for our membership of the Single Market and for the people to have the say on the final deal in a referendum."

What is a Hard Brexit?

The UK's independent fact-checking charity, Full Fact, define a Hard Brexit as ending Freedom of Movement and therefore leaving the Single Market. They say that a softer Brexit would look more like Norway, who are in the Single Market.

Many other independent outlets share this definition, including the BBC who state that "when critics of the prime minister talk about a "hard Brexit", they basically mean that she has decided to leave the EU single market and the customs union."

What did Vicky Foxcroft say in the Snap Election?

With 70% of Lewisham residents voting to Remain, it is no wonder that Vicky Foxcroft said that she would fight a Hard Brexit. This was printed on almost every leaflet, like this one below: 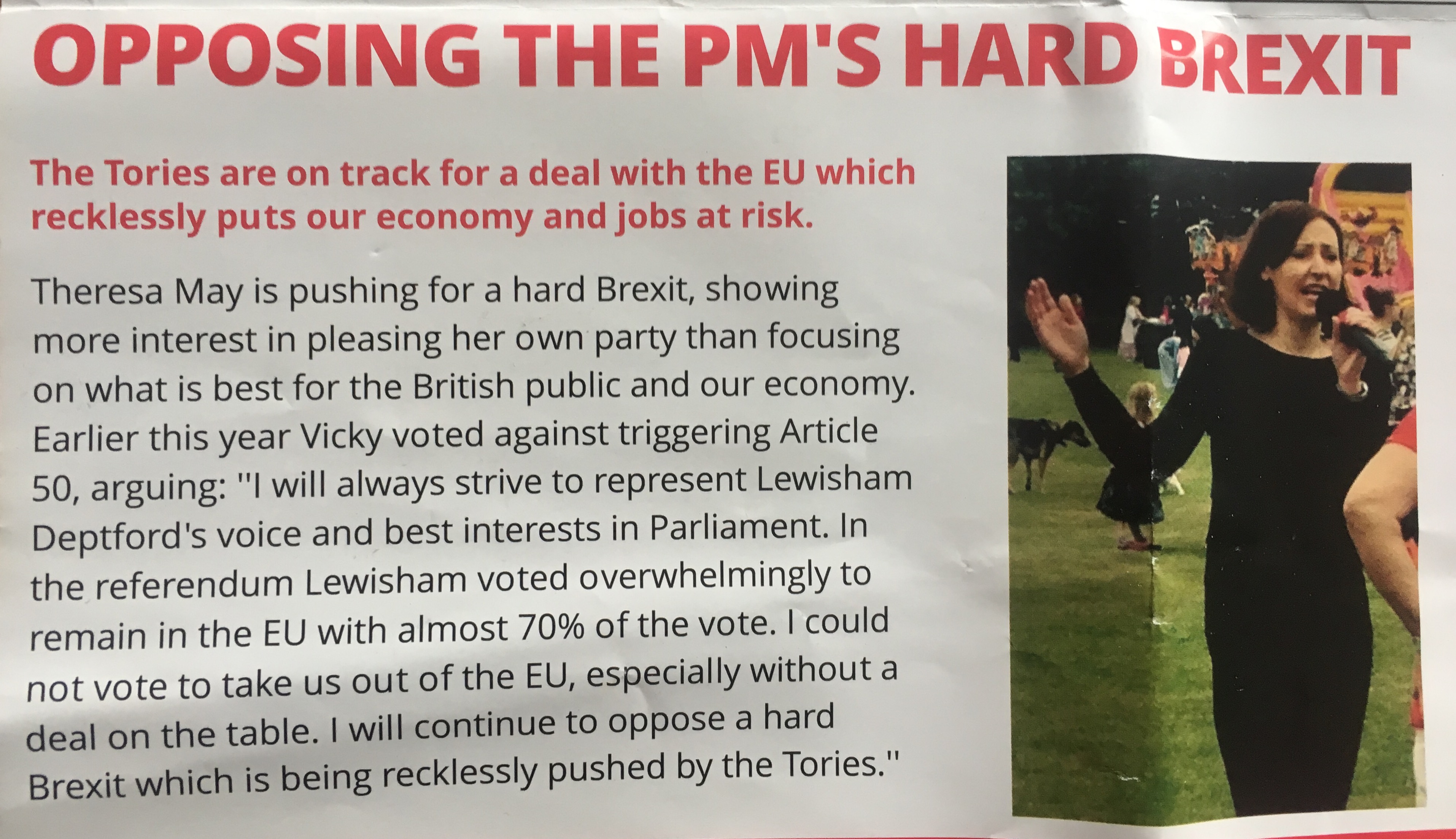 What has happened since the Election result?

With a Hung Parliament, Theresa May's version of a Hard Brexit is not guaranteed. MPs across party lines can plausibly unite to take a better route. Consequently, the Liberal Democrats were joined by a group of  50 Labour MPs, led by Chuka Umunna, in the fight to stay in the Single Market via a letter to The Guardian. They said

This week, Parliament was due to vote on the Government's agenda also known as the Queen's Speech. Local MPs Heidi Alexander and Ellie Reeves signed an amendment to the Queen Speech, calling for the UK to remain in the Single Market. Lib Dem spokesperson, Bobby Dean, wrote to Vicky Foxcroft to see if she would support such an amendment and received no direct reply.

How did Vicky vote?

Chuka's amendment was selected for debate by the speaker after receiving cross-party support. Labour issued a three-line whip ordering MPs not to support the amendment. Fifty Labour MPs defied the whip and joined every Liberal Democrat MP, as well as SNP and Green MPs, through the lobbies in support of remaining in the Single Market. Vicky refused to support the amendment.

The Labour leadership put forward their own amendment, which watered down the commitments to fighting Brexit. This is presumably because their voting base is split on the issue across the country. Vicky, who serves as a Party Whip under Corbyn's leadership, expressed her support for that amendment instead.

Some Labour frontbenchers were prepared to lose their jobs with the party on a matter of principle and honoured their commitment to their constituents to fight a Hard Brexit. Vicky chose to put her job with the party before the residents of Lewisham.