Bobby Dean, Liberal Democrat Parliamentary Spokesperson for Lewisham Deptford, argued that directly elected mayors should be scrapped in a letter printed in the the London Evening Standard today.

The letter was in response to Simon Jenkin's claim that they would improve local democracy. You can read the printed version here (original full letter below): 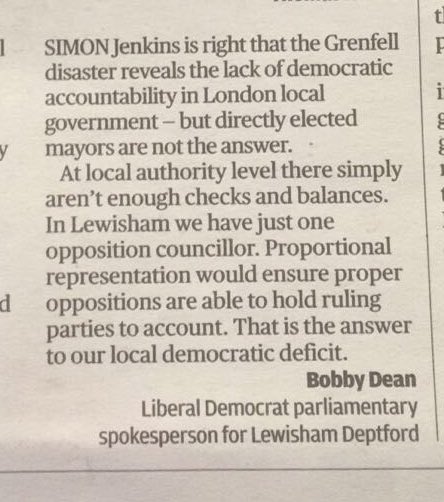 Simon Jenkins is right that the Grenfell disaster reveals the lack of democratic accountability in London government - but directly elected mayors are not the answer.

In Lewisham, we've suffered badly from this political experiment. Unchecked power is concentrated into a single office where patronage abounds. Ask Millwall FC if the system works - or indeed the residents of Tower Hamlets.

At a local authority level, there simply aren't enough checks and balances. In Lewisham we have just one opposition councillor.

A cross-party campaign has come together to Bring Back Democracy and scrap the mayoral system. But more can be done.

Proportional Representation would ensure proper oppositions are able to ask the tough questions and hold ruling parties to account. That is the answer to our local democratic deficit.